After a long hiatus from X games, I decided to fire up X3 Albion Prelude on my Linux laptop. I played X3 Reunion and X3 Terran Conflict exclusively with a keyboard and mouse, but this time around I wanted to try using my XBox One controller for flying, dog fighting and possibly some management. So, I plugged in the controller and started the game launcher which had an option for joystick configuration. 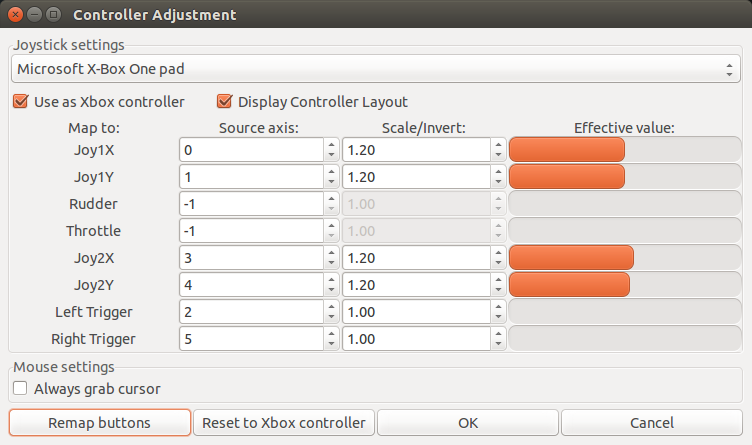 The game uses SDL2 for joystick support, and my controller was detected correctly though I had to check "Use as Xbox controller" to disabled the Rudder and Throttle. Clicking on "Remap Buttons" brought up the following dialog box.

I had to click "Reset to Xbox controller" to make the button codes map to button names. After this, I started the game and took some time to adjust myself to using the controller for this game. Everything seemed to work fine, except for the D-pad. Instead of doing actions such as docking and bringing up comms, the camera perspective changed. Digging through the in-game controls, it looked like I was using a hat switch to change views. It may be possible to remap the hat switch to actions I wanted on the D-pad, but I would not be satisfied if I could not figure out why this is happening. Clearly, this game was designed with various controllers in mind, including the Xbox 360 controller. Were the button mappings wrong? I decided to dig deep.

First, I wrote a python script that used pysdl2 to check the events generated by the Xbox One controller: https://github.com/sbobovyc/GameTools/blob/master/common/sdl2_controller.py

After doing some research, I realized that there already exists a tool for this called jstst, but I wanted to play around with pysdl2 at some point anyway. With my tool and jsts I was able to see that the D-pad buttons were not recognized as buttons by SDL2, but as a hat switch. This makes sense given how the game was switching views when I pressed buttons on the D-pad. Luckily, I can take a look at the driver code to figure out what's going on.

Very quickly I spotted the culprit of this behavior in xpad.c: http://lxr.free-electrons.com/source/drivers/input/joystick/xpad.c#L552

So xpad->mapping is responsible for determining if the D-pad is mapped to buttons or to a hat switch. This struct field is set during xpad_probe(): http://lxr.free-electrons.com/source/drivers/input/joystick/xpad.c#L1130

The variable dpad_to_buttons is a module parameter:

This can be easily seen with modinfo:

I can check the value of the module parameter through the proc filesystem:

Afterwards, I unloaded the kernel module then loaded the module with the dpad mapping set:

Thinking that I had found the fix, I then made sure that the module was always loaded with that parameter set to true by editing /etc/modprobe.d/xboxone.conf:

I ran my python script and saw that the D-pad events were still being interpreted as hat switch events. After reading the xpad documentation, I realized that dpad_to_buttons only works with controllers which are unknown.

It was now time to modify some kernel source. I grabbed a copy of my running kernel's source and set things up for compiling modules:

And compiled and installed the new module:

And finally reloaded the module:

My python script now showed that D-pad events were button events! I started up the game and everything worked as it should, so great success. I could have continued to play the game, but I decided to revert the code back to original. Instead of modifying the controller definition, I modified xpad_prob to use controller type and module parameter to set the D-pad mapping:

I reloaded the driver with the dpad_to_buttons set and the controller worked as expected.

Changing the behavior of the kernel module through the module parameter is cumbersome since the module has to be reloaded. There is a userspace Xbox controller driver called xboxdrv, but I thought that it was more work setting that up than compiling a custom module. In theory, I can change the module parameter permissions from 0111 to 211 with S_IRUGO|S_IWUSR so that I could use the proc filesystem to change the D-pad mapping without unloading the driver. While I was doing research for this topic, I ran across a different solution that was used for Xbox 360 wireless controller https://github.com/dtor/input/commit/5ee8bda943de20017636845a5c8d7069a4a283b8

I really hope this behavior is rationalized by the Linux Kernel developers so that game and library developers don't have to deal with this BS.

I am glad I got this working because X3 is fun and I am happy to spend more of my gaming time playing on Linux.